Bikini Waxing is hardly new but its variations grow faster than - well - shaved pubic hair. Many shy away from waxing because of the pain. However, recent advancements in wax production have reduced the pain factor...somewhat. Still, this is best done by a qualified professional. To do it yourself is the ultimate in masochism. Waxing can be limited from just the bikini line to EVERYTHING (Brazilian). In between, there are landing strips, tufts and a variety of designs available. If you're a warrior, you can do it at home but it's best with a licensed -- and sensitive -- professional. Then you won't have to sit there and gather the courage to let it rip!
Does it Hurt?
You betcha! But since you're a woman, you can get through anything...
For those with low pain threshold:
WARNING!!!
Do not contemplate bikini waxing if you have diabetes, suffer from psoriasis or other skin conditions, or if you take Retinol or Accutane. If you're uncertain, ask your doctor.
The Traditional (Regular) Bikini Wax, the least extreme form, simply removes hairs outside the panty line. It's a good place for the neophyte to start or just if you're looking for a tune-up. (Ouch Factor: 4)
The Full Bikini Wax goes a bit deeper than the Regular Wax. Generally, it eliminates the bikini line and includes waxing some hair on top to make a more defined ‘triangle’ area, or trimming down the hair left shorter. Best for those who want to keep hair but also want more definition than a tune-up.  (Ouch Factor: 5.5)

The Brazilian Wax, introduced in 1987 by seven Brazilian-born sisters, remains a popular method especially for women who wear thongs. A Full Brazilian (sometimes called the “Sphinx,” ironically, named for a smooth-skinned, hairless cat from Canada) involves the removal of all hair in the pelvic area, front and back -- the buttocks and adjacent to the anus, perineum and vulva (labia majora and Mound of Venus). Some clients may choose to leave a ‘landing strip’ on the Mound of Venus. (Ouch Factor: 8) 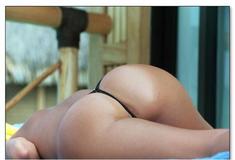 Advantages:
Disadvantages:
A man will go to war, fight and die for his country. But he won't get a bikini wax.
--Rita Rudner

Did you know?
The TRIANGLE  is associated with the number three.
Pointing upwards,  it symbolizes fire, male power and a counterfeit view of God. (pyramid).
Pointing down, it symbolizes water, female sexuality, and goddess religions. (full bikini wax).
Bikini Waxing